A Beneficial Wasp in the Wrong Place, Wrong Time Becomes a Pest

As a newcomer to our home landscapes in the Pacific Northwest (PNW), the European paper wasp, Polistes dominula, has a reputation as both a beneficial predator and a pest. The European paper wasp is a relatively tame wasp that forages within landscape plants in search of leaf-feeding caterpillars and other insect prey. However, it is also a nuisance pest that will sting people who accidentally disturb or threaten it or its nest. 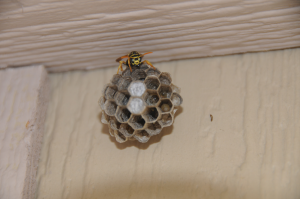 In early spring, homeowners may remove wasp nests by knocking them down with a long broom, pole, or strong stream of water from a hose. This is the best time to remove a nest because only a single female will be guarding it. It may take repeated removal of each nest to discourage the wasps from replacing it. It is important to wear gloves and protective clothing to reduce any risk of getting stung, and although the sting is mild, it will get your attention.

For more information, go to The European Paper Wasp  FS152E located at http://pubs.extension.wsu.edu/the-european-paper-wasp-home-gardening-series. 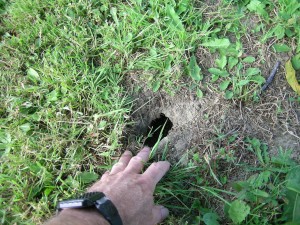 Praying mantids are among the largest (1 to 4 inches long) and most recognizable garden predators—and they’re not fussy about what they catch and eat. They are “sit and wait” predators that pounce on any insect that comes too close, including beneficial in­sects, like bees and butterflies. The most common species in the Pacific Northwest is the European mantid (Mantis religiosa). Praying mantids are most often seen in the garden from mid-summer to mid-autumn.  After laying a number of white, hard-foam egg cases (which overwinter attached to branches and trunks), Mantids are typically killed off by the first frosts of autumn. They kill and consume a good number of pests like caterpillars and flies, but their contribution to garden pest control is usually less than their larger-than-life image.

For more information on beneficial arthropods in the home landscape, see WSU Extension manual EM067E- Beneficial Insects, Spiders, and Other Mini-Creatures in Your Garden: Who They Are and How to Get Them to Stay on-line at http://pubs.extension.wsu.edu/beneficial-insects-spiders-and-mites-in-your-garden-who-they-are-and-how-to-get-them-to-stay-home-garden-series

Voles in the garden

Did your tulips fail to emerge this spring? Did most of your planted peas disappear? Are there tunnels in your garden? If so, voles may be to blame. 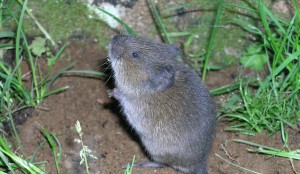 These voles prefer succulent grasses, forbs, roots and bulbs but will also readily feed on the bark and roots of woody plants during winter when other food sources are scarce.

For information on how to manage voles in your garden and landscape, see the WSU fact sheet, Vole Management in Home Backyards and Gardens.

Recognizing Sapsucker Damage to Your Trees

Sapsuckers, a species of woodpecker, are a common cause of tree damage in yards and small woodlands. This damage is easy to identify. Sapsuckers peck holes in the bark of the tree that are approximately 1/4 inch in diameter and are drilled in horizontal and vertical rows. There are usually many holes close together. 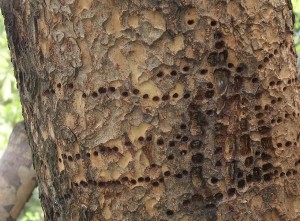 Sapsuckers will feed on both hardwoods and conifers. They prefer foraging on trees with thin bark, such as birch. Older conifers with thick and ridged bark are not as susceptible to sapsucker-caused damage. If the damage is limited and minor, the tree will recover.

The most commonly recommended damage control method is to wrap burlap around the affected area to discourage sapsuckers from returning. Liquid spray repellents applied to the tree bark can also be used as well as hanging bright, shiny objects such as pie tins, streamers, or beach balls on the tree as scare devices. These techniques may or may not be effective, and they may just shift the bird’s focus to another part of the tree or to a neighboring tree.

For more information on sapsucker damage to trees, go to http://pubs.extension.wsu.edu/recognizing-sapsucker-damage-on-your-trees.