How to Recognize and Eradicate Bed Bugs

Whether it is spring fever or the opening of the Master Gardener Clinic in Yakima County, March and April tends to bring out the worst in bed bug sightings.  Since bed bugs are household pests, there should be little or no seasonality to bed bug abundance.

The saying “sleep tight, don’t let the bed bugs bite” is not just a quaint bedtime rhyme, but also a reminder that bed bugs do exist, and they require human blood meals to survive and provide for their offspring. In today’s highly mobile society, bed bugs have reestablished themselves as household pests. Bed bugs are not known to transmit human diseases, but they can cause skin welts, local inflammation, and contribute to insomnia. 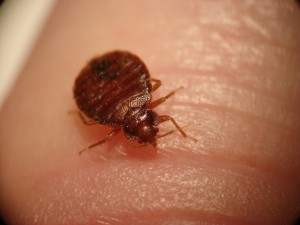 Bedbug getting up close and personal with an Extension Entomologist (Photo Credit: Michael Bush)

Bed bugs have been found in homes, apartments, rental units, and even hotels throughout Washington with increasing frequency. Cimex lectularius is the most common species that feed on humans.

1) Avoid introducing bed bugs into your home. Homeowners should not acquire second-hand mattresses and upholstered furniture without first quarantining them.

2) Remove or replace any infested furniture, including mattresses, box springs, couches, and upholstered chairs, whenever possible.

3) Clean and vacuum furniture and mattresses and wash bedding weekly. This will reduce, although not eliminate, bed bug infestations.

4) Establish a barrier or space between the bed and the floor to further discourage bed bugs from climbing onto the bed (remember bed bugs are wingless and cannot fly).

5) Obtain pesticides labeled for indoor use against bed bugs. Look for an annually revised listing of these products on the WSU Pestsense website at http://pep.wsu.edu/pestsense/.

6) Inspect sleeping areas in rooms adjacent to the infested area since these surprisingly mobile, yet wingless, bugs can move into surrounding areas.

The incidence of bed bugs is on the rise in North America, so precautions to avoid introducing them into your home are prudent. Bring any bugs found during a home inspection or captured on sticky traps or cards to your local Extension office for identification. While there are management strategies that homeowners can take to reduce the incidence of bed bugs in an infested household, the best management strategy is to cooperate with a local pest control professional to eradicate the problem.

For more information on Bed Bugs: Recognition and Management go to http://pubs.extension.wsu.edu/recognizing-and-managing-bed-bugs

9 comments on “How to Recognize and Eradicate Bed Bugs”